SQLite is a lightweight, Single file and simplest form of SQL database, we can implement an SQLite database for small scale purpose(Eg. a phone book).

and drop in the editor.

Search and drop the 'function' node which looks like this:

Search and drop the 'SQLite' Node which looks like this:

2) Connect them as shown:

So we explain what the flow and their node actually do:

3 ) Double Click on 'Inject' Node, To reveal window as: 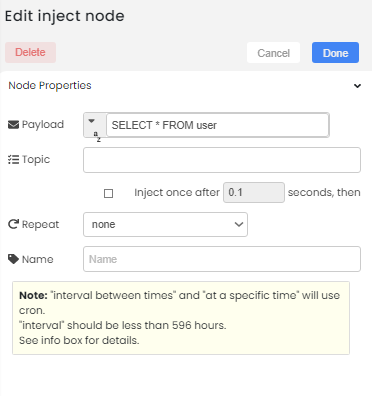 Here We injecting a query

Where in Node.js function it is converted as a string input and parsed as a parameter.

4) Before we use a database, we upload our database (.db) file in managed storage

to reveal the storage option.

Here we drop our 'DemoSQL.db' file. 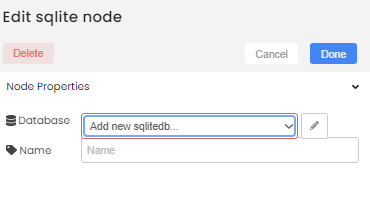 As we creating a new Database profile click on

and next, give the path of your .db file.

6) After Connection Database, the 'SQLite' node should be tagged with 'OK' as Shown Below.

7) By double-clicking the 'Console' Node, modify its settings as given below: 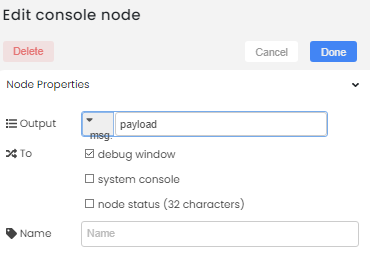 8) The console Node is required for the viewing output of given payload output, By default, it shows 'msg.payload' output.

7) you may think about the result simply click on

You could see the output similar to this:

Here Object 'msg.payload' parses output which the query response returned in JSON, as Depends on the query.

As this example We can use our SQL Queries, Generate queries by functions, even running stacked queries.

Whenever we need to collect data by forms, saving Tabular data or simple account ...

Whenever we need to collect data by forms, saving Tabular data, or simple account...

As like other databases, MongoDB has its own stunning features such as Easier Jav...

How to create a Database Connection

In this example, we will walk you through on how to create a database connection ...